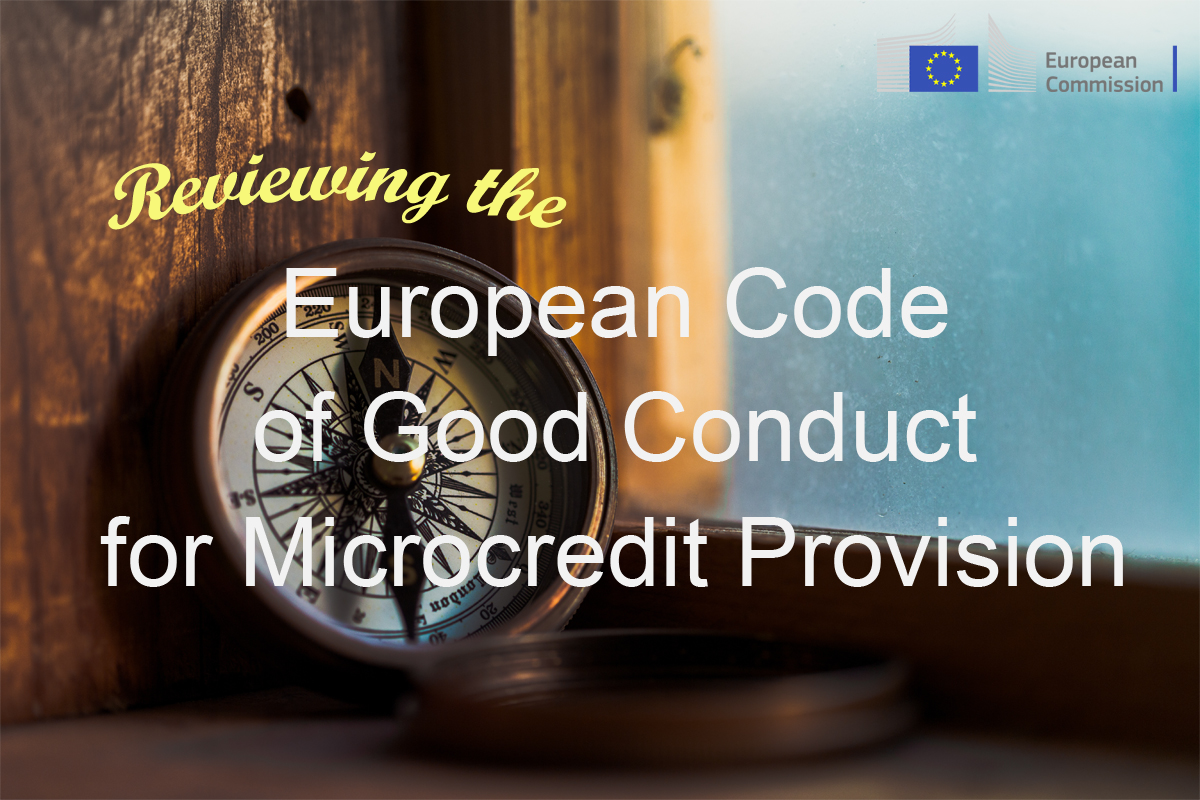 The European Code of Good Conduct for Microcredit Provision is an instrument for ensuring quality standards in the European microfinance sector. It is a voluntary instrument, developed in response to the need for a unifying set of expectations and standards for the sector for the benefit of practitioners, customers, funders, investors, regulators and partner organisations. In its 2007 communication on microcredit, the European Commission identified a code of good conduct as a good way to spread good practice among European microcredit providers. The groundwork for the development of the Code started in 2009-10 with a series of expert workshops organised by the Commission. In 2010-11 the Code was drafted in consultation with the European Commission, practitioners and stakeholders and the first version was published in 2011. The methodology for assessing compliance with the Code was subsequently developed in 2012-13.

The Code provisions apply to non-bank Microfinance Institutions (MFIs) that decide to sign up it. It is also relevant for banks active in the micro-finance sector that may decide to endorse it.

The implementation of the Code was tested as part of a pilot phase between end 2013 and early 2017. Based on the lessons learned from the pilot phase, an update of the Code is deemed necessary to reflect changing market realities and capture the full diversity of the microfinance landscape and its actors. In addition, the Code currently follows a one-size-fits-all approach, while certain clauses may not be applicable to certain MFIs due to diverging national legislations. For instance, non-bank MFIs in certain countries are prohibited from disbursing loans and, subsequently, cannot be comprehensively assessed with respect to the Code.

Banks and non-banks MFIs receiving support from the European Programme for Employment and Social Innovation (EaSI 2014-2020) are required to endorse or to sign-up to the code. Respect of the Code will continue to be a key requirement for implementing EU financial instruments in support of microfinance in the next programming period 2021-2027.

The purpose of the update is to finetune the current clauses, where appropriate, to better reflect market realities and the diversity of the institutions in the European microfinance sector. In addition, the existing Code self-assessment tool and Code methodology document need to be revised accordingly.

The updated version of the Code will have to meet two key requirements: 1) ensuring a robust quality standard for the sector and 2) contributing to spreading the use of the code as a best practice for microfinance operations at European and world-wide levels.

Following a competitive tendering process, the University of Salford has been selected to conduct this process. This will include drafting interim changes to Code based on feedback from sector, prepare content for and facilitate five stakeholder workshops, test interim changes with a representative number of practitioners and drawing on results of testing and consultation to update Code in close liaison with the Commission and key stakeholders.

The diagram below provides an overview of the process: 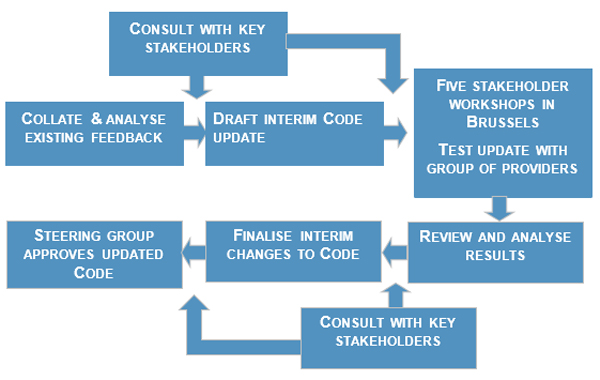 The University of Salford has reviewed and collated feedback and input from three sources:

The University of Salford has analysed this feedback to identify substantive and minor amendments. Based on this analysis, the University has produced a draft interim Code update.

The University of Salford will consult with the microfinance networks (EMN, MFC), the EaSI TA consortium and the Code evaluator throughout the process (MFR). These organisations sit on important technical expertise in the domains of the Code, knowledge of the microcredit sector and insight into the feedback about the Code from practitioners. The purpose these discussions will be to ensure that a) all relevant feedback from sector (collated by the networks, evaluators and TA providers) is captured and b) that proposed amendments address the concerns. The group may also provide support with testing through providing data and contacts.

The University of Salford will prepare and facilitate five stakeholder workshops held in Brussels and hosted by the European Commission (see table below).

Eleven MFIs[2] were invited to the workshops to ensure representation of different providers in terms of country, size, maturity and experience with the Code. Eight stakeholders, including EMN, MFC, EU institutions, banks, investors and experts, were also invited.[3] The participants will review and discuss the changes proposed in the amended interim Code. They will reach consensus on recommendations for the changes to the Code, which may include accepting, rejecting or amending changes to the Code.

The University of Salford will test the interim changes to the Code with a representative selection of 20-25 non-bank microcredit providers. The testing will involve telephone and Skype interviews with the providers. The purpose of the testing is twofold. On the one hand, tests the extent to which the changes are in line with actual practice. On the other, it assesses the degree of disruption the proposed changes would cause for providers that have already signed up to the Code.

The University of Salford will analyse and discuss the results of the testing with the Code Steering Group. Based on the results of the testing and the stakeholder workshop recommendations, the University of Salford will draft a proposed final version of the Code. This will be done in consultation with DG EMPL, the Networks, the Code evaluators and the EaSI TA consortium. The Code Steering Group will decide on the approval of the final version and the timing of its implementation.

The consultation process will take account of the possible transition arrangements needed to introduce new provisions in the Code, ensuring that all changes take account of the situation of MFIs that have been recognised as Code-compliant in the pass. The Code Steering Group will consider an adequate phase-in period, taking due account of technical assistance needs and rating procedures.

The table below shows the key milestones and dates for the Code revision process.

If you have not been invited to the workshops, it is possible to stay up to date with the process. The following documents will be made publicly available

It is also possible to provide input and comments. If you have any comments, questions or suggestions, please send these to EMPL-VT-2018-023@ec.europa.eu

"The Code" gets updated to reflect market reality and microfinance diversity