Grounded Theory (GT) methodology was used, focussing on in-depth interviews with 31 participants from a UK-based MFI. GT generates understanding in fields with little prior literature (Glaser and Strauss, 1967). It is especially apt for reaching the aims because it approaches the field with no a priori assumptions. Instead, it accesses the opinions and experiences from service users who are best placed to ascertain if they feel more or less financially included and why. Also, its core analytical tool ensures that findings are rooted in data which is useful to counteract the assertion that the design of most microfinance research is flawed because it is looking for positive social outcomes (Bateman, 2010).

The main findings are that participants experienced considerable improvements in financial and social inclusion despite poverty-line incomes and poor credit scores thus improving financial capacity and money management. The majority of lending is used for consumer consumption which meets core social needs and contributes to ‘lead(ing) a normal social life in the society in which they belong’ (European Commission, 2008:9). This leads to a higher standard of living resulting in important mental and physical health improvements as well as increasing self-esteem. These results provide empirical evidence demonstrating microfinance’s ability to promote financial and social inclusion. The limitation of the results are that they are not generalizable because of sample size. But it could be extended to include customers from a range of consumer-lending MFIs in the United Kingdom and across Europe to ascertain if the findings can be replicated. These findings represent cutting edge research in an unexplored field of European microfinance so will make a significant contribution upon which others can build future impact studies. 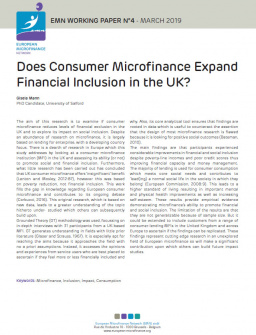 Enhancing the Financial Health of Micro-entrepreneurs: Beyond a mere assessment